Li-ion batteries come in many varieties but all have one thing in common — the catchword “lithium-ion.” Although strikingly similar at first glance, these batteries vary in performance, and it’s mostly the cathode material that gives then their unique personality.

Unless you are a chemist, the names of the materials in a lithium-ion battery can get confusing. This article provides clarity by listing six of the most common lithium-ion batteries and giving examples of typical uses. Their full chemical names and colloquial short names are summarized in Table Li-cobalt is the most popular consumer battery. Its high specific energy provides satisfactory runtime for cell phones, laptops and digital cameras. The battery consists of a cobalt oxide cathode and a graphite carbon anode. The cathode has a layered structure and during discharge lithium ions move from the anode to the cathode. The flow reverses on charge. The drawback of Li-cobalt is a relatively short life span and limited load capabilities (specific power). Figure 2 illustrates the structure. 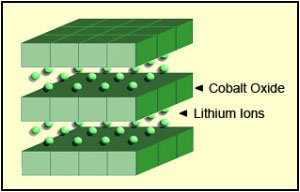 The cathode has a layered structure. During discharge the lithium ions move from the anode to the cathode; on charge the flow is from anode to cathode. Figure 3 summarizes the performance of Li-cobalt in terms of specific energy, or capacity; specific power, or the ability to deliver high current; safety; performance at hot and cold temperatures; life span reflecting cycle life and longevity; and cost. The hexagonal spider web provides a quick and easy performance analysis of the battery characteristics.

Lithium insertion in manganese spinels was first published in the Materials Research Bulletin in 1983. In 1996, Moli Energy commercialized a Li-ion cell with lithium manganese oxide as a cathode material. The architecture forms a three-dimensional spinel structure that improves ion flow on the electrode, which results in lower internal resistance and improves current handling. A further advantage of spinel is high thermal stability and enhanced safety, but the cycle and calendar life is limited.

Low internal cell resistance is key to fast charging and high-current discharging. In an 18650 package, Li-manganese can be discharged at currents of 20–30A with moderate heat buildup. It is also possible to apply one-second load pulses of up to 50A. A continuous high load at this current would cause heat buildup and the cell temperature cannot exceed 80°C (176°F). Li-manganese is used for power tools, medical instruments, as well as hybrid and electric vehicles.

Figure 4 shows the crystalline formation of the cathode in a three-dimensional framework. This spinel structure, which is usually composed of diamond shapes connected into a lattice, appears after initial formation. Li-manganese has a capacity that is roughly one-third lower compared to Li-cobalt but the battery still offers about 50 percent more energy than nickel-based chemistries. Design flexibility allows engineers to maximize the battery for either optimal longevity (life span), maximum load current (specific power) or high capacity (specific energy). For example, the long-life version in the 18650 cell has a moderate capacity of 1,100mAh; the high-capacity version is 1,500mAh but has a reduced service life. Laptop manufacturers would likely choose the high capacity version for maximum runtime; where as the maker of cars with the electric powertrain would take the long-life version with high specific power and sacrifice on runtime.

Figure 5 shows the spider web of a typical Li-manganese battery. In this chart, all characteristics show as marginal, however, newer designs have improved in terms of specific power, safety and life span. In 1996, the University of Texas (and other contributors) discovered phosphate as cathode material for rechargeable lithium batteries. Li-phosphate offers good electrochemical performance with low resistance. This is made possible with nano-scale phosphate cathode material. The key benefits are enhanced safety, good thermal stability, tolerant to abuse, high current rating and long cycle life. Storing a fully charged battery has minimal impact on the life span. As trade-off, the lower voltage of 3.3V/cell reduces the specific energy to slightly less than Li-manganese. In addition, cold temperature reduces performance, and elevated storage temperature shortens the service life (better than lead acid, NiCd or NiMH). Li-phosphate has a higher self-discharge than other Li-ion batteries, which can cause balancing issues with aging. Figure 6 summarizes the attributes of Li-phosphate. 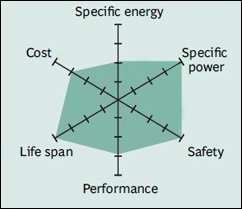 The secret of NMC lies in combining nickel and manganese. An analogy of this is table salt in which the main ingredients of sodium and chloride are toxic on their own but mixing them serves as seasoning salt and food preserver. Nickel is known for its high specific energy but low stability; manganese has the benefit of forming a spinel structure to achieve very low internal resistance but offers a low specific energy. Combining the metals brings out the best in each.

NMC is the battery of choice for power tools and powertrains for vehicles. The cathode combination of one-third nickel, one-third manganese and one-third cobalt offers a unique blend that also lowers raw material cost due to reduced cobalt content. Striking the right balance is important and manufacturers keep their recipes a well-guarded secret. Figure 7 demonstrates the characteristics of the NMC. NMC has good overall performance and excels on specific energy. This battery is the preferred candidate for the electric vehicle.

The Lithium Nickel Cobalt Aluminum Oxide battery, or NCA, is less commonly used in the consumer market, however high specific energy and specific power, as well as a long life span, get the attention of the automotive industry. Less flattering are safety and cost. Figure 8 demonstrates the strong points against areas for further development. High energy and power densities, as well as good life span, make the NCA a candidate for EV powertrains. High cost and marginal safety are negatives.

Batteries with lithium titanate anodes have been known since the 1980s. Li-titanate replaces the graphite in the anode of a typical lithium-ion battery and the material forms into a spinel structure. Li-titanate has a nominal cell voltage of 2.40V, can be fast-charged and delivers a high discharge current of 10C, or 10 times the rated capacity. The cycle count is said to be higher than that of a regular Li-ion; the battery is safe, has excellent low-temperature discharge characteristics and obtains a capacity of 80 percent at –30°C (–22°F). At 65Wh/kg, the specific energy is low. Li-titanate charges to 2.80V/cell, and the end of discharge is 1.80V/cell. Figure 9 illustrates the characteristics of the Li-titanate battery. High energy and power densities, as well as good life span, make the NCA a candidate for EV powertrains. High cost and marginal safety are negatives.

Figure 10 compares the specific energy of lead, nickel- and lithium-based systems. While Li-cobalt is the clear winner by being able to store more capacity than other systems, this only applies to specific energy. In terms of load characteristics and thermal stability, Li-manganese and Li-phosphate are superior. As we move towards electric powertrains, safety and cycle life will become more important than capacity. Lithium-cobalt enjoys the highest specific energy, however, manganese and phosphate are superior in terms of specific power and thermal stability. Courtesy of Cadex.

Never was the competition to find an ideal battery more intense than it is today. Manufacturers see huge potential for automotive propulsion systems, as well as stationary and grid storage applications, also knows as load leveling. At time of writing, the battery industry speculates that the Li-manganese and/or NMC might be the winners for the electric powertrain.

The author’s battery experience has mostly been in portable applications, and the long-term suitability of batteries for automotive use is still unknown. A clear assessment of the cycle life, performance and long-term operating cost will only be known after having gone through a few generations of batteries for vehicles with electric powertrains, and more is known about customer’s behavior and climate conditions under which the batteries are exposed.